Some people have mentioned that this would be a great place to blog about my life as a truck driver. While it has given me the time to think up the stories that I write and has been good to me financially, trucking is not where I want to spend the rest of my life. After twenty-two years of it, there is a ranch in Washington State I would rather spend more time on, writing and staying in one spot for a while.

For those who are interested in the trucking side here is what has been going on for the last three weeks. First for those who don't already know I don't drive your average truck and trailer. What I do is referred to as Heavy Haul. There are varying degrees from hauling wide, tall, and heavy loads on trailers with as few as five axles (the same as the average truck and trailer) on up to monster rigs that require two trucks just to move the trailer. The trailer I have been pulling for the last seven years has an axle that flips up or down as needed for weight, it also stretches from as short as forty-eight feet (average length for most trailers is up to fifty-three feet) to as long as seventy three feet. Because of this feature I can end up in some crazy places with some crazy loads. My last three loads have been an example, they were identical fiberglass storage tanks, and when loaded onto the trailer my over all dimensions came out to, seventeen feet six inches tall (four feet taller than the average truck) fifteen feet six inches wide (seven feet wider than the average truck) and over all my truck and trailer measured in at ninety-one feet long a full twenty feet longer than the average truck. Here is what one of the loads looked like sitting next to an average truck. 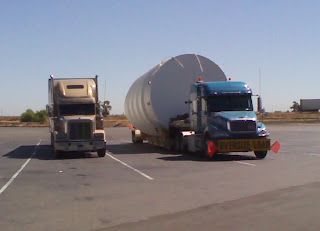 Needless to say these were high stress loads. Most of the route was on small back roads to avoid low overpasses and other overhead obstacles. The entire route there was someone out in front of me with a pole set up to measure everything that I passed under including power lines and tree branches, another car followed behind me and for most of the trip there were three California Highway Patrol cars with us.

The first day of each run was spent loading the trailer and getting from Anaheim up to the high desert and the town of Hesperia. Second day was spent going the four hundred miles from Hesperia to a little town called Santa Nella. Once there it was spend the night and most of the following day till night and taking the load in after dark. Now dodging low wires is bad enough in the daylight when you can see them but it is much worse at night when they blend in with the sky. While the trips were rough in places we got them all done without incident. Each trip took almost a week to make because of the scheduling and other restrictions.  One of the side benefits of it all was that I managed to get a considerable amount of writing done.

There you have it a glimpse into the trucking side of my life.